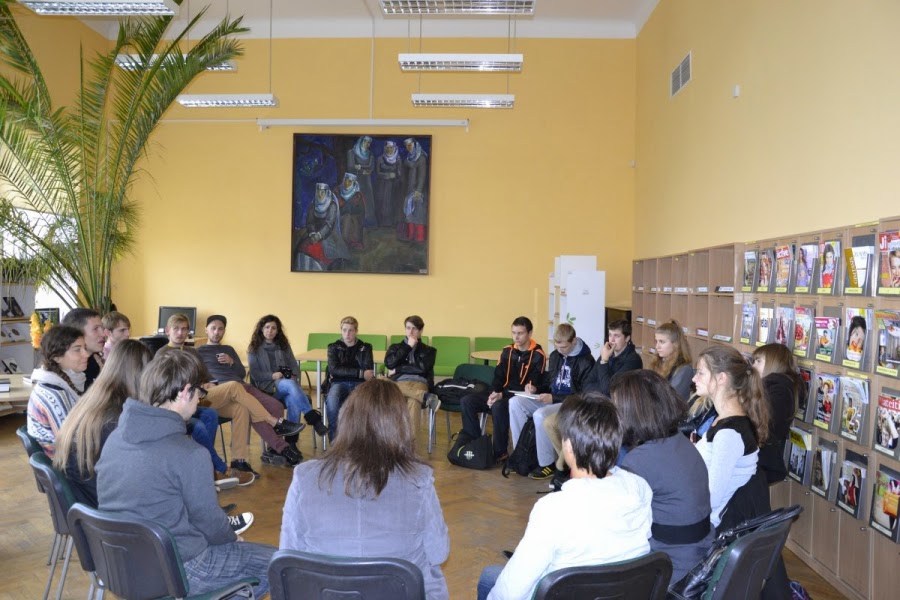 On 8th of October we had international guests in the library. They came with "Caravan of volunteering". It was organize by DEINETA and the route of it was going through few Lithuanian towns Shvenchionys - Zarasai - Anykščiai - Tytuvėnai - Plunge.
At list 8 guys came. Among them were 5 lithuanian volunteers and 3 international  - 2 girls from Italy Francesca and Gioia and Judith from Germany. They had a mission to promote and share with young people information about volunteering oportunities, DEINETA's work and projects. 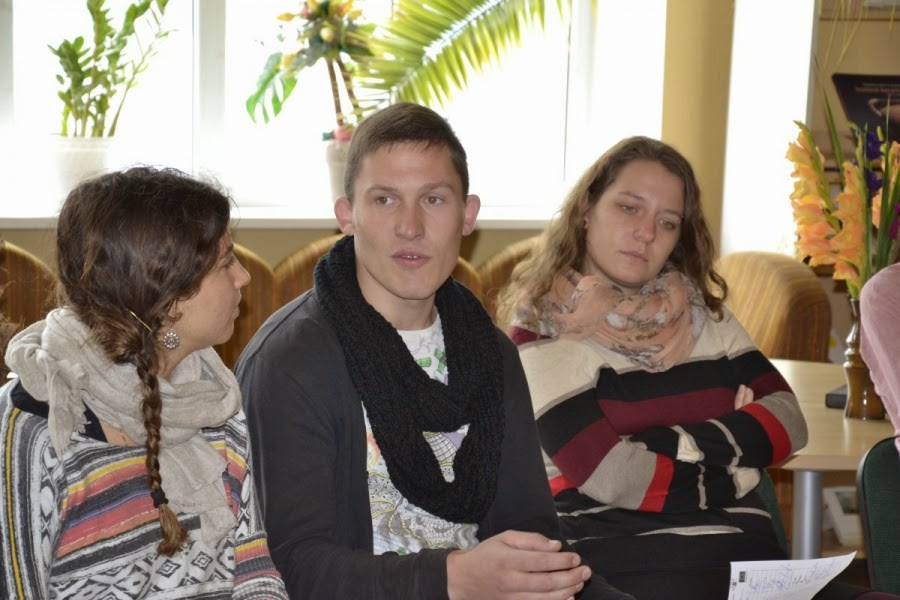 This meeting was very interesting. Girls shared their huge volunteer's experience. For example, Francesca and Gioia participated in some local Italian projects and projects in Nepal and Brasil. And Judith had her project in Armenia. Her project was long term but it wasn't EVS.
Girls was coming to Lithuania first time and was impressed of Lithuanian nature and culture. 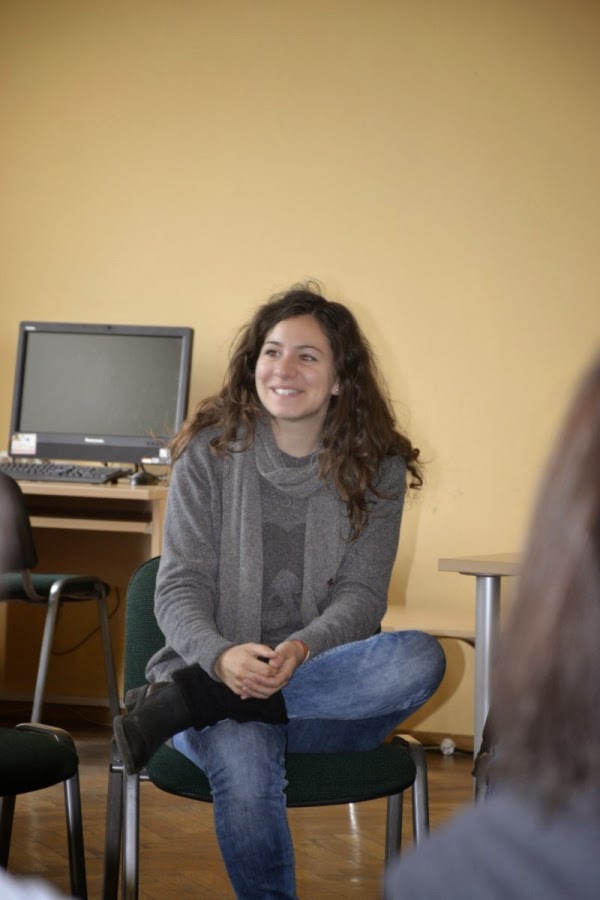 We spent time in very interesting discussion and everybody after it was really inspired. Hope some of that young guys will try volunteering even just once!!!

Posted by Zhenia Bannikova at 00:21

At the second week end of September (from 13th to 14th) I was in Salakas with some other volunteers. We celebrated all together birthdays of two volunteers Max's from France and Angels' from Spain. There were 14 guys from Franse, Russia, Lithuania, Armenia, UK, Spain, Netherlandes and Ukraine. We spent nice week end all together. We played in active games on a beach, walked to the forest, drove bicycles, made barbeque - meat for non-vegetarians and vegetables and mushrooms for vegetarians. On a brakfast is was a pankakes with zucchini and apples. It was cool and fun time and unusual international birthday party I ever have been!!! 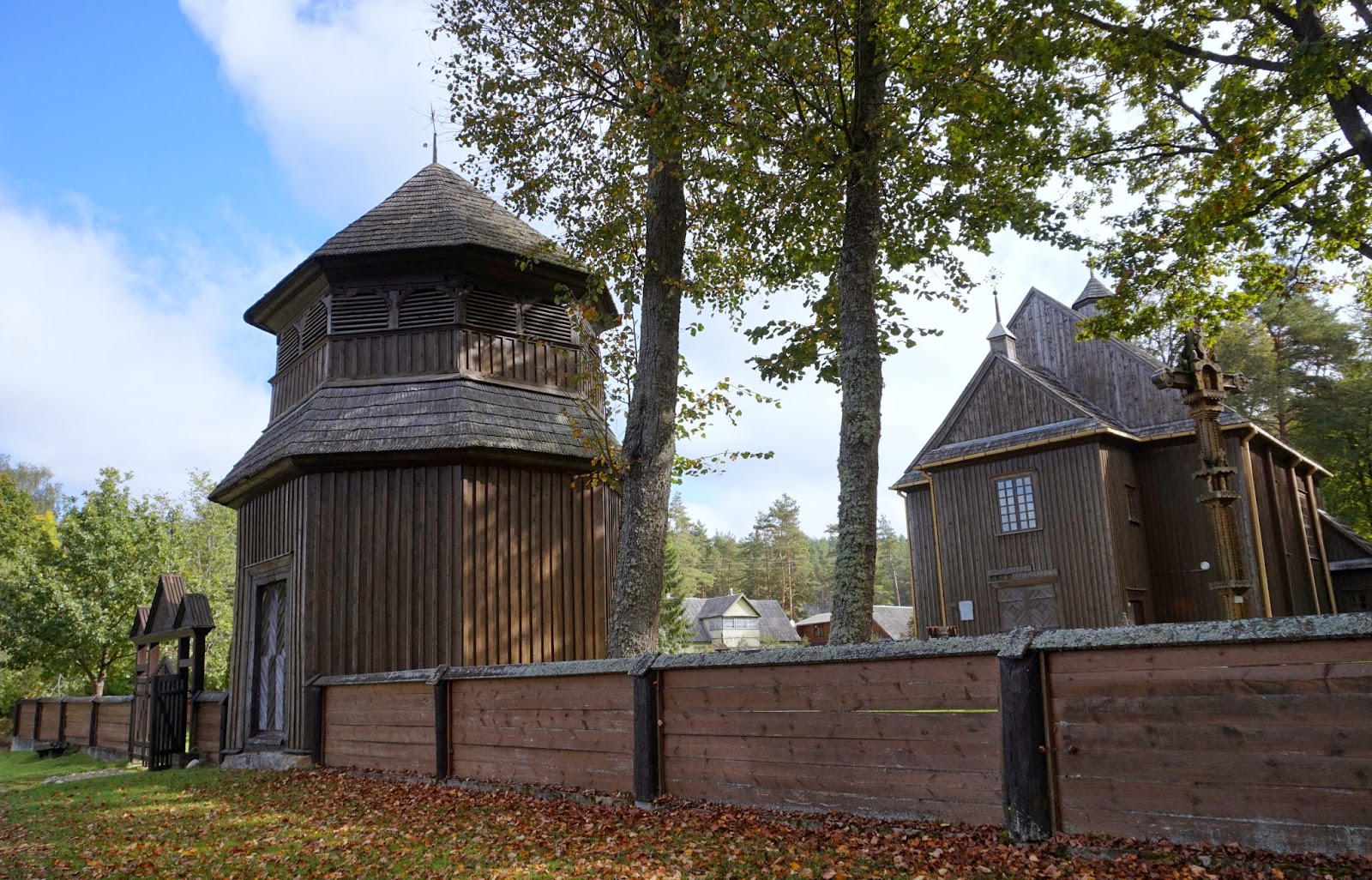 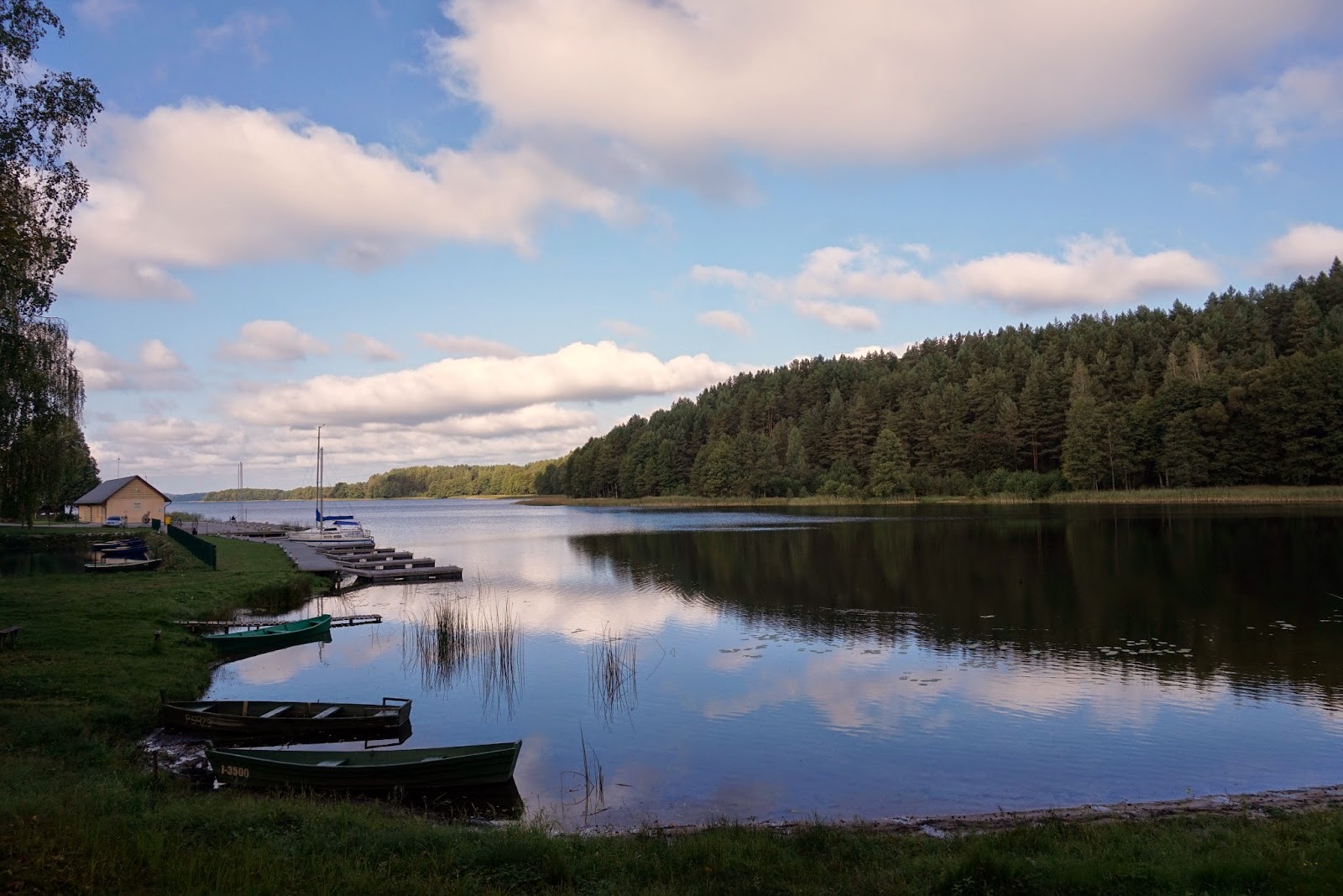 After Salaka at the same week end (from 14th to 16th). I was in Ignalina. I desided to visit Alba also volunteer from Spain who works there and visit Aukštatia National Park in Palūše where she works. It's one of the biggest parks in Lithuania. It's really huge and very beautiful. I was impressed. This park is quite popular and well known among not just local people but also among foreign tourists. There are a lot of activities for visitors. The park is full of different tracks (for cars, foot walking or boat trips). I was on one foot track - "Botanical track". It's very short distance just 3,5 km with 7 stopes. On each of that stopes you can read and learn some info about protected lithuanian plants. Also there are a lot of wooden sculptures around the park but unfortunately most of it is destroyed or in a very bad condition. And Alba as a restaurator tries to take care about it. She cleans and covers each of it by protected material. I think she is doing very good and useful job for this park! It was nice meeting and I happy I could see one more beautiful Lithuanian place and meet with Alba now my friend!

Posted by Zhenia Bannikova at 09:46

In the middle of August in Zarasai and in the library was several events. 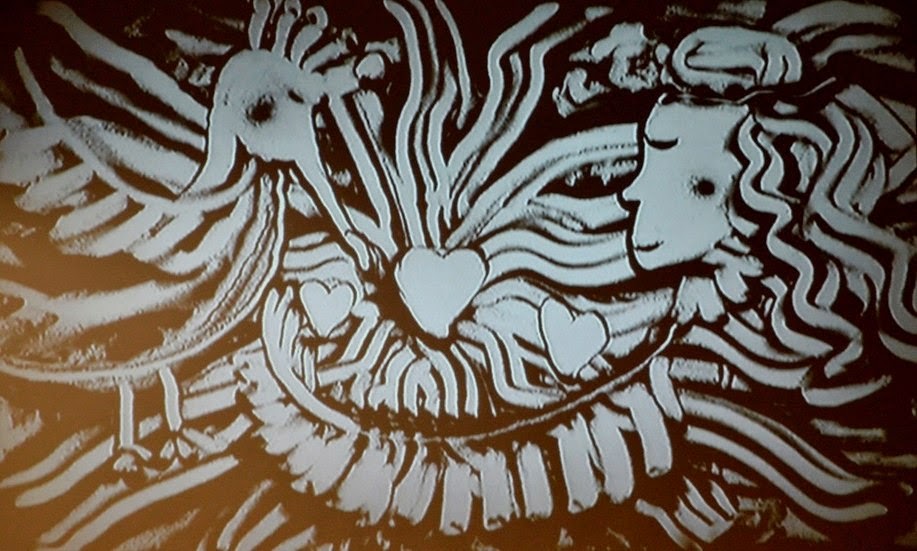 At the 14th of August was a "Night reading". It's an every year event. People could come to the library, relax and listen some poets.
This year this event was organizing in very interesting way. It was not just simply poetry but it was combined with jazz and sand drawings. I could say it was amazing combination )))
So people came at 9 pm. Our reading hall of the library was full. Everybody wanted to see how it would be. And it was interesting. People set and listened some lithuanian poets. The event started at 9 and finished at midnight. Everybody enjoed the event and for my opinion had very interesting evening. Hope next year it also will be something similar!
On a 15th of August our library participated in a book fair. The event took part on the main square. There were some publishing houses who presented their production. I really liked "Nieko rimto" (www.niekorimto.lt).It has very interesting and beautiful design of books and postcards. Each design is unique and made by different artists and illustrators. 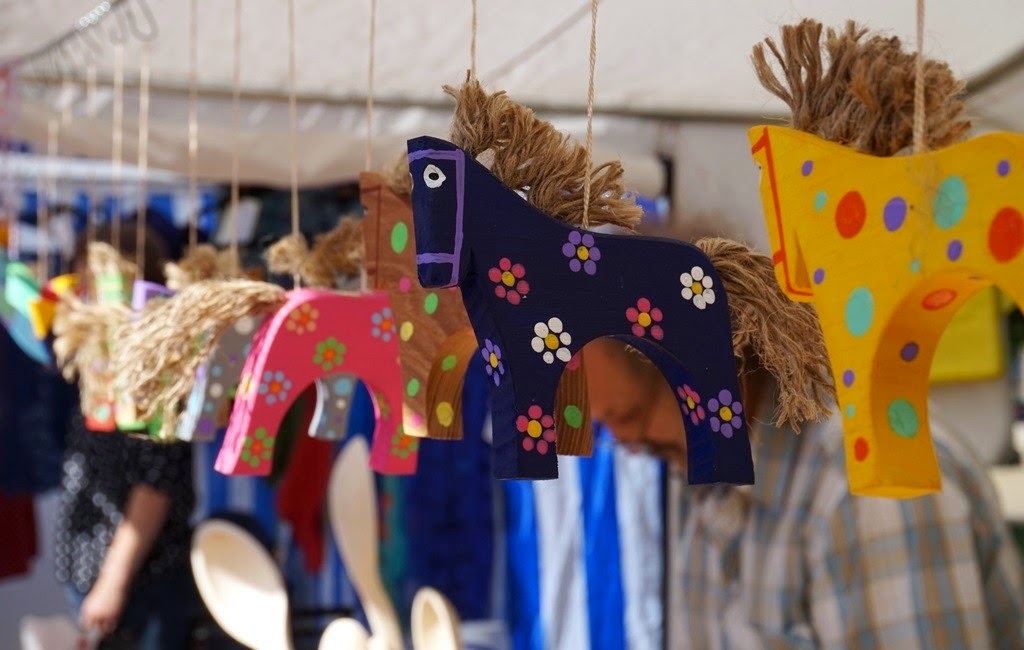 At the same day as book fair also Zarasai celebrated birthday. So in the evening on that day on the main square was a big concert. The main band played there was pop-folk band "KITAVA". The guys were very energetic and funny. Volunteers from Salakas and some other volunteers from another short-term project in Antalepte (about 15 guys) also came to Zarasai and we spent time all together. It was nice evening with fireworks at the end of the day.

Posted by Zhenia Bannikova at 04:47

At the beginning of August I was on the volunteer's fest "SAVAS FESTAS". It was from 9th till 10th of August in small place Rėkalnis 2 km far from Trakai. The organizators was SALTES one volunteer's organization in Lithuania. The festival was during weekend.
It was a big festival. Mostly there were lithuanian volunteers but also were some EVS volunteers like me (about 15 totally).
To get the place of the festival you could by hitchhike. SALTES offered to all participanse join hitchhike race. And for example I did it with one girl from Spain ) It was really interesting. In the morning I came to Ignalina from Zarasai to meet with that girl (also EVS) by hitchhike and after we were going together to Vilnius and than to Rekalnis (place of the fest) by hitchhike too. It was so amazing and interesting. We met so many interesting and kind people on the road.
The festival was organize on 4 different stages: organizations fair, eco zone, volunteer's zone, extreme zone.
So everybody could chose a stage and workshop he is interesting more that others and participate in it. The programe was very intensive and interesting.
The organizators also organize one free dinner for everyone. And in the evening and during the night there was interesting concert of the few lockal bands. Actially the fest was near the lake so nobody was boring!
So my main conclusion about that event can be just positive. I could say my weekend wasn't boring and I really enjoy the time and company we were together 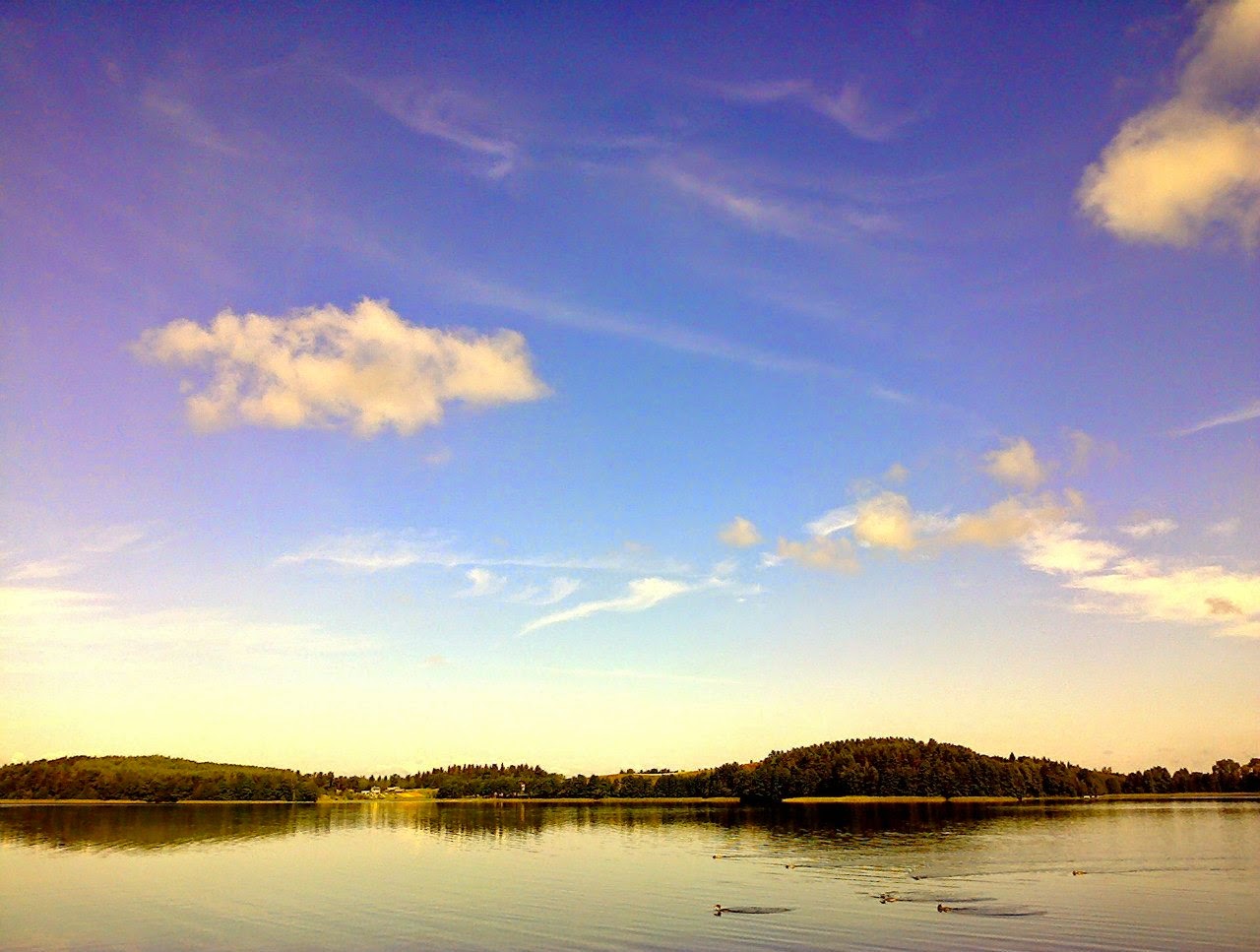 Rėkalnis. Trakai. Place of the fest
Posted by Zhenia Bannikova at 08:45

At the middle of August from 15th till 17th of August Zarasai toke place for another big music event. It was festival of a rock and similar music styles. Everything was organized as "Galapagai" on an island of the lake of Zarasai. It's interesting this fest normally take place in a different places each year and the organizators told before they wants to organize it in Varena but they changed their mind and finaly decided to do it in Zarasai.
Many people came to this fest but not too much as to "Galapagai". It was I think due to the style of music cause not so many people likes 'hard'. For sure pop music is more popular among people.
I didn't go on it due to my personal reasons (music style, money - ticket was not so cheap for me)  but as I know it was great!
So next year welcome to Zarasai or enother place to visit this fest )))
And more info about this event you could find on the official web page www.rokonaktys.lt

Posted by Zhenia Bannikova at 08:38

From 7th till 9th of August in Nothen-Easten region of Lithuania was big event - rally "300 lakes". This rally is very populas among lockals. The route is always the same. It starts from Visaginas, goes throught Zarasai and ends in Salakas. Different cars participated In the rally professionals and non-professionals. The participans was from different countries Lithuania, Latvia, Estonia, Poland, Belarus, Ukraine and Russia. Mostly the drivers on their cars were from one country but at the same time were also mix. For example I checked one car the drivers were from Russia and Poland.
First day the drivers represented their cars. And they started one by one each 5 minutes a new car. I also looked on the cars it stayed on the main square before start. I even found one car from my region in Russia! When I did I couldn't belive in it ))) But it was funny! It would be like a memory about this event )))
I saw just part of the rally in Zarasai cause it was for free. Normally the price for one ticket was 35 lt - not so expencive and not so cheap.
The part I saw was enough to imagine how it was at all. So I could say it was amazing, incredible and exciting ))) Could you imagine a car goes very fast at the same time has to move in difficult turn! Some drivers were crazy and their cars overturned just on the road. Yes, from time to time there was a little bit dangerous.
To tell the truth this rally is one of the favourite events of people. Not only me came to watch rally. I could say there was the most big fans of it!!!
It was my first time I saw this kind of event. And I liked it very much! Especially for emotions I get during and after )))

Posted by Zhenia Bannikova at 08:49

On 7th of August I participated in marathon for disabled.
It was a special project from 6th till 13th of August organized all together by 3 countries Lithuania, Latvia and Belarus. It called "Green routes without obstacles". There were about 30 disabled from this countries. They had to drive about 350 km on wheelchairs during about one week. One day they were staying in one place.
The organizators in Lithuania was Grazhute regional park. The road of the marathon was going through Zarasai and I desided to join to volunteers from Grazhute and help them.
Our main task was help to disabled to moving in hard parts of the way. Also we organized accomodation for them  - were preparing a camp with tents to sleep, making food and organizing eating place.
It was totally new experience for me. I couldn't say it was easy to do but I happy I get it and could help to guys. 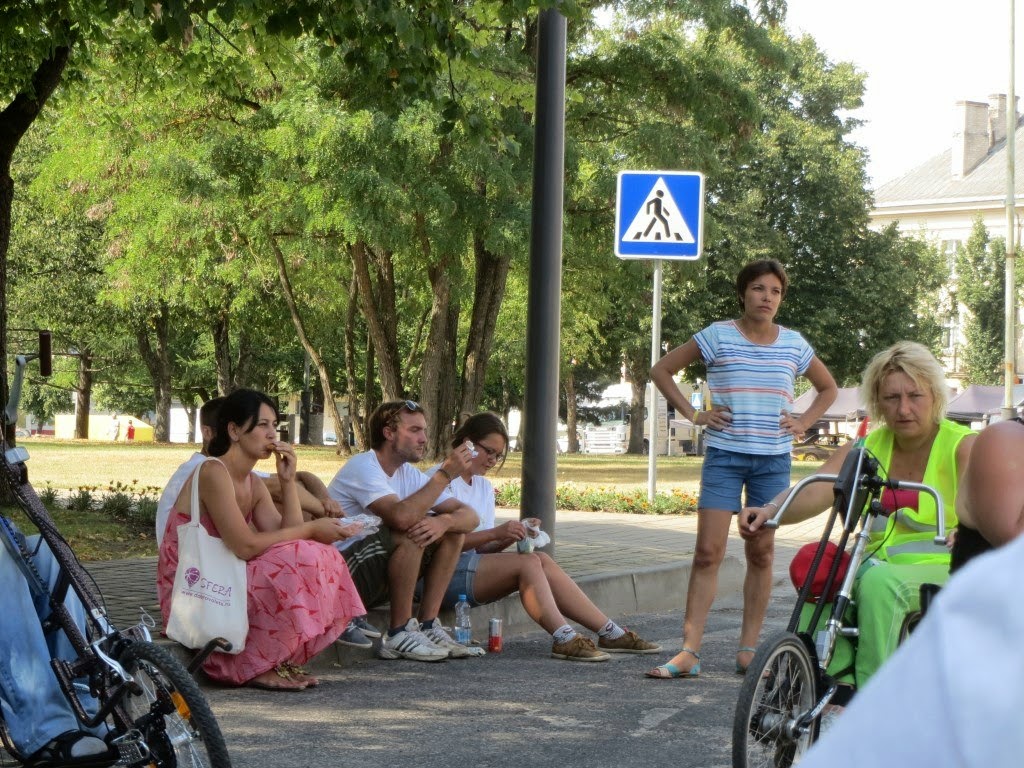 Marathon. Day in Zarasai.
Posted by Zhenia Bannikova at 08:01